In recent years we have built up an enormous network of friends and supporters. Often, we were surprised and honored by spontaneous actions of individuals, schools and companies. Support can come in all kinds of forms. Small or big. Alone or together. In your spare time or together with your company. Below we list 5 original ideas to inspire.

Birthday money
Will you have your birthday? This is the chance to do something good for someone else. Instead of collecting material gifts, you can request a contribution for Estrela da Favela. Already, birthday celebrators collected money in envelopes or had their birthday money deposited directly into our account. This way, not only you’re having a party, but so do the children of Estrela da Favela.

(Business) team building
What could be better than fighting for a good cause together? Companies that preceded you, organized brainstorming afternoons among colleagues to make Estrela da Favela financially sustainable. It doesn’t stop with just ideas, they’re also implemented. For example, someone invented a ‘tikkie system’ (a Dutch phone paying system) to donate directly.

Unusual event
We all know the classic fundraiser dinners. Nothing wrong with that, but maybe something new could be fun? In the past, the Rotary organized a boat trip through the Amsterdam canals: anyone with a boat could join with their friends. It was a fantastic summer day that ended with a dinner and party. Another example is the Estrela da Favela pub quiz, which got attended by 120 people. Young and old competed for the first prize. The night closed off with a big Brazilian party.

A caipirinhabar at your party 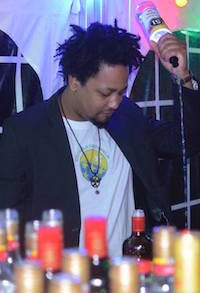 Are you organizing a party? Do you throw a concert? Then, we have a recipe for success: the caipirinhabar. It requires a small organization from a good shaker (we can help you with that), some purchasing (make sure that the ice doesn’t melt) and a payment system. But it is an absolute win-win situation. While the party people are happy with a delicious cocktail, money comes in. Many events have already preceded you, such as the concerts of singer Fleurine.

Cycle the world
People run marathons, row boats and organize tennis clinics. We can’t say anything but chapeau! These are small contributions that help Estrela significantly. Moreover, we think it is great if people are committed to us and this way help us with the branding of our foundation. Mark Koelen took it to the next level. He cycled from Amsterdam via Los Angels to Rio de Janeiro for Estrela da Favela.

Do you also have such a (crazy) idea? Let us know! Do you have tips? We are always open to hear from you.

If your idea is not included? You can always transfer a large or small fixed amount per month or per year, by clicking here. That would also help tremendously.