Some thirty minutes from the tourist beach of Copacabana the doors of the metro open. We walk up the stairs of the Maracanã station. Looking left, I witness a glimpse of the famous football stadium, that gave its name to the metro station. But we turn right. Our goal today is not a football match, but a visit to a favela in Rio. A favela called Mangueira. Today is about to show me a different Rio de Janeiro. 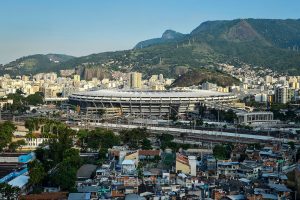 Mangueira is an important and well-known favela in Rio de Janeiro. It has around twenty thousand inhabitants, but it looks way more, seeing the amount of houses built on different hills. It’s the birth place of the modern samba and a hugely popular samba school. During carnival in Rio the streets color pink and green, the colors of Mangueira. The colors of one of the most traditional samba schools and a multiple winner of the yearly carnival parade.

Today our guide is Edwin Roodenburg, a Dutch guy (67) from Amsterdam who started in 2012 with an ngo named Estrela da Favela (Star of the Favela) in the community. He and his teachers now educate and take care of over a hundred children that live in Mangueira. We pass by a little football field, that was built around the World Cup in 2014 with money donated by Dutch connections of Edwin. Through the almost leafless trees it is possible to seethe rood of the Maracanã stadium on the other side of the railway. “They play soccer here every day and have a dream to, one day, play in that stadium and be famous”, says Edwin, with a small smile. ”Of course, those chances are pretty small, to say the least.” 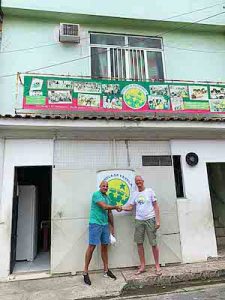 Around the corner we arrive at the school of Estrela da Favela. A two stories high building, with two relatively small rooms used for teaching the kids, from all ages. The base floor is used for a kitchen, where the ngo provides a lunch. “What we do is way more than just teach kids to count and read”, explains Edwin. “Instead of them hanging on the streets, we educate them in every sense possible. Lots of kids have no, or not a proper, family structure. For example, the father has died and the mother is addicted to drugs. So we try to be a home for them.“

And it looks like this is how the kids feel about the place. Jokes and laughter are present at all time. Almost like it’s a normal school. They make music, they play sports and just have fun between them. When we leave the school for a walk through the favela, at every corner someone greets Tio Ed, Uncle Ed. “It is very gratifying to see the kids grow and learn every day”, he smiles.

The streets of Mangueira – visit a favela in Rio

We enter the narrow streets, a labyrinth of turns, ups and downs, but mostly up. It is possible to take pictures, but not of the faces of the people. “The drug gang doesn’t want any pictures taken”, says Edwin. There are some roads we avoid, because that’s where active trafficking takes place. And then after a small climb up, we get to the view point of the favela. And it is breathtaking. You can see all the highlights of Rio, from the Guanabara Bay to the city center, from the top of the Sugarloaf mountain to the Christ Statue and, of course, the Maracanã stadium. 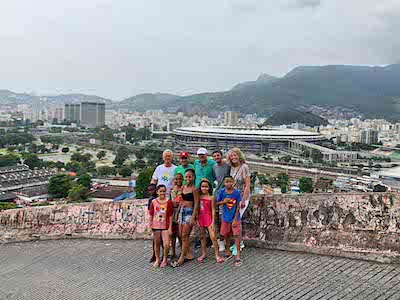 We ask Edwin if he never wonders about his safety, or that of his teachers. He laughs: “We know the traffickers and they know us. They are not an issue in terms of safety. The real problem is once the police starts an operation in the community, but that didn’t happen for a long time already.“ In Mangueira the status quo is pretty clear, the police stays down at the entrance of the favela, next to the football field. Inside the favela the drug gang rules. And when no one breaks this arrangement, everything works relatively fine.

When leaving Mangueira, I suddenly realize how symbolic the rail way is, that separates the community from the big, famous Maracanã. Where legends like Pelé, Zico and Romario became heroes of the nation. That is what this community, and the other more than a thousand communities in Rio are and will always be: that place on the other side.

When you got interested to visit a favela in Rio and would like to experience the other side of the city, that is possible. We offer a tour in cooperation with Edwin and Estrela da Favela, check out the tour details here. Over fifty percent of the money you pay for the tour is invested directly into the project.